A random collection of thoughts on a variety of topics

One of my favorite movies that I will watch any time it is playing is Jurassic Park. I don’t know what it is about that movie but every time I watch it I see or realize something new.

One of the characters, the billionaire founder of Jurassic Park John Hammond is always stating how he “spared no expense” while designing and building the park. Every aspect of the park was cutting edge, automated, and centrally controllable. All of this automation was provided by 8 networked Thinking Machine CM-5 supercomputers.

Now, while John Hammond’s boast might be true when it comes to the computer equipment, gourmet food, cars, and the DNA wet lab, he was actually quite cheap when it came to hiring trustworthy staff. In the end, this would prove to be his undoing. 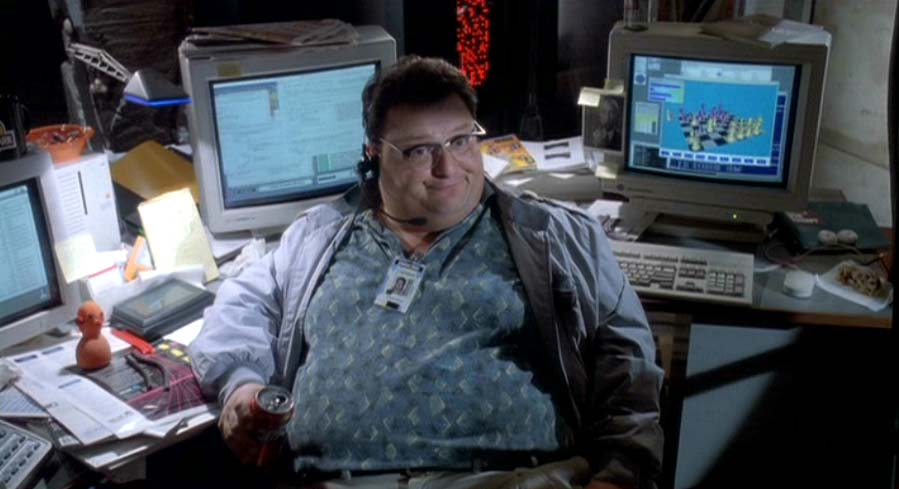 In the famous line delivered by his developer Dennis Nedry:

I am totally unappreciated in my time. You can run this whole park from this room with minimal staff for up to 3 days. Do you think that type of automation is easy… or cheap? Do you know anyone who can network 8 connection machines and debug 2 million lines of code for what I bid for this job? Because if he can I’d like to see him try.

Dennis sums up a large and pervasive problem with how John Hammond deals with spending his money. He spends millions of dollars on super computers, and hires the lowest bidding, single developer to do a job that would take a team of five to get done right. At one point Hammond asks Nedry if he has “debugged the phones yet.” Why didn’t they use an off the shelf PBX system instead of writing their own? I have no idea!

So lets pretend for a moment that Nedry was disgruntled, but not a thief and would have just continued to finish out his contract at Jurassic Park. This still would have lead to the degradation, and eventual failure of the parks automated systems. Since Nedry was the only developer, there was no one else there to check his work or take over for any responsibilities. He was also under a tremendous time pressure to get the park open, which leads even the best developers to take shortcuts and just hack things together. In real dev work we call this “technical debt” because at some point you will pay the price for these bad decisions. Finally, once his contract was up he would have left on bad terms with Hammond, forcing Hammond to hire a new developer to continue Nedry’s work. The new developer would have to learn all of the code (over 2 million lines) and try to make fixes. More than likely the new developer would have discovered the immense technical debt that built up and have to re-write many parts of the system, which is a waste of time and money.

Although this was just a movie, I realized that this demonstrates an actual problem with the disconnect between stake holders (like John Hammond) and developers (like Dennis Nedry). I believe it is safe to assume that Hammond did not have a true grasp on the level of complexity of the system he was trying to implement. He is just a business man with a ground breaking idea, and a lot of money. Because of this he had no way of knowing what a bad bid for this development contract looked like. He may have had a few $800,000 - $1.1 million bids from teams of qualified developers, and saw Nedry at the bottom, who presumably had all of the necessary qualifications, with $150,000 and thought “well that’s a much better price to get this work done.” Instead he should have considered that it was a bad bid and no one would ever be able to do this work by themselves for so cheap.

Hammond does come to realize his mistake after the park systems go down. In a conversation in the cafeteria with Dr. Sattler he says that next time there will be less automation, and more people. Of course this is a knee jerk reaction to the immediate problem. The automation was not to blame, it was how he implemented the automation. He still does not have a grasp on real issues.

Of course I am ignoring the other pressures that were on Hammond in this analysis. It could be argued that he wanted minimal staff to keep maximum security and secrecy. But he still dropped that ball by hiring only one developer. Had he hired 3 developers to work on the project, Nedry would have had a hard time slipping his bad code into the system. The two other developers also would have been familiar enough with the system, and had the appropriate access levels to undo the Nedry hack.

So in conclusion, do I think Hammond was the “bad guy” in all of this, or that it was all his fault? No, Nedry ultimately decided to betray everyone and got himself and most of the staff of the Jurassic Park killed in the process. I am saying that Hammond should have invested more in his staff, and not just in the hardware. All the electric fences and automation in the world did not stop a fat man at a keyboard from tearing everything down.